Last night, one of my parishioners came over and cooked dinner for me and my family. Actually, that statement doesn't do justice to what she did! She made a virtually gourmet dinner for us, with many courses. She came and basically took over the kitchen - bringing the food and wine, preparing it, serving us, and then cleaning everything up, and not letting us help at all. It was such a nice thing to do, and very, very delicious - including some new foods I had never had before. After dinner, with dessert, we also played a game called Rummikub - which I had never played before. It was fun and I am looking forward to a rematch, now that I know how to play.
So, if any of you out there wonder what nice thing you might do for your pastor, I would recommend this! My only regret is that I was so tired and had a headache and so wasn't as good company as I wished I could have been.
But yesterday I got over a big hump at school (that's why I was so tired). I presented and handed in my big research paper. The professor will now tear it up so I can revise it and hand it in again in a few weeks for my final grade. The presentation went fairly well, except that Microsoft bit me in the butt! How? Well, I made a Mac-version-of-Powerpoint presentation to use and exported it from Mac format into Powerpoint format, to use on the PC in the classroom. Well, Mac exported it into PP 2003 format, but the PC had PP 2007 on it, and guess what? Microsoft software is not upward compatible! So, half the slides didn't come out right and were basically unusable! Argh! Next time I will remember to bring an adapter and just plug my Mac in. Fortunately, I had also made a handout for the class, so for much of the information that didn't come out on the slides I was able to refer the class to that.
Overall, school has been good - I have learned a lot. It has been hard keeping up and trying not to let it interfere with my church schedule, but on those days I am tired and don't feel like pushing on, I keep reminding myself what a great opportunity God has given to me to pursue these studies, what a great church He has entrusted to my unworthy care, what wonderful parishioners He has surrounded me with, and what a wonderful, forgiving, and understanding family I have. How richly blessed I am.
Posted by Pastor Peasant at 7:45 AM No comments:

A Cool Picture (and Blog!)

This is a nice blog to go and read when you have the time. This pastor has consistently been posting some pretty good stuff! But the reason I am bringing it up today is this picture - this is a baptismal font! Does it not look like this man is being brought up out of the tomb? Is that not what happens in baptism? We are given a new birth to a new life through the resurrection of Jesus from the dead to whom we now are joined. Just great. If we ever get to have our own church building, I am going to push for a font like this! :-)
Posted by Pastor Peasant at 11:55 AM No comments:

Yes, I'm still alive! Sorry (once again) for my long delay in posting anything. I have good intentions, but so precious little time these days. I am not complaining, though. I keep reminding myself that God has blessed me with so many opportunities. I am very fortunate.

Yesterday in church, we had a little furry visitor. I had actually seen him in the building before, I believe, quite some time ago at a Bible Class. Yesterday, however, he decided to make his presence known during the sermon and the prayers! I got a bit distracted, but continued. Some folks managed to get him out the door without too much disruption before the Lord's Supper began - I was going to stop the service and take care of him before trying to distribute the Supper! But gratefully, I didn't have to.

But what was this little critter? He was not a chipmunk, for he had a tail like a squirrel. But at the same time, he did not look like a squirrel either. His markings were different and his eyes too big. I had thought (when I saw him before) that he was someone's pet who had escaped. I still think so. So, I did a quick Google search for "pet rodents" and found this: 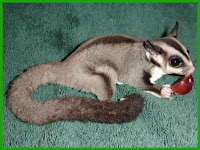 He is called a "Sugar Glider" and his description certainly seems to fit the little guy I saw yesterday! The information also said it is often mistaken for a flying squirrel, which many in my congregation thought it was after he launched himself off my pew near the pulpit! If it was this guy (and I'm certainly not sure!), he is an Australian marsupial and most certainly was someone's pet. I don't know if we'll ever see him again, but if so, perhaps we should try to catch him in a box instead of shooing him out the door and get him a good home.

Anyway, if this *was* him, it makes Dr. Veith's post on the day (read it here) even more amazing! For, to top off all that he wrote, his family brought along a visitor to church yesterday from . . . can you guess where . . . Australia! Things that make you go hmmmm. :-)
Posted by Pastor Peasant at 8:00 AM 2 comments: