Well, the cicadas have come out with a vengeance! At least around our home. It seems very unusual that outside my home we are inundated with cicadas and shells, but right on the other side of our neighborhood, not so much. I wonder why that is? The good news is that they seem not to be making much noise around our house - all the noise is coming from farther away. Again, I wonder why that is? There are strange creatures . . .

In other news, we are looking to move into a new, bigger home soon, so that my father can move down here and live with us and we can care for him better. So . . . we are in the process of getting our house ready to sell, getting our financing into place, looking for a bigger house with the private space we need for my father, and all while making frequent trips to Philadelphia to help him now, and finish school, and church, and summer activities . . . tiredness! But it's important, so off we go. Our only non-negotiable about the house is that we keep our older kids at the same high school - don't want to make them go to a new school. Inventories are down right now, which means we'll have trouble finding a new home, but also have no trouble at all selling our current home. There is a model up the street almost the same as ours that sold in just three days on the market! So no worries there. Just have to find a new one.

So if you're in the market for a townhouse in Northern Virginia, let me know! I know of a good one for sale . . .

Posted by Pastor Peasant at 9:19 AM No comments:

I was down in Florida for part of last week attending The Lutheran Haven Board of Trustees meetings. The Haven is an Adult Care Community (independent living cottages, assisted living facility, nursing home, and other assorted buildings and services) that my District owns and operates. I am serving my first term as Trustee. It has been a very interesting experience so far as the Haven is going through a time of much transition - a new CEO was hired in the Fall, and a building program is now beginning. The Haven is now 65 years old, which we commemorated last week. Here is the homily I preached for that. These trips always take some steam out of me.

What is also happening is that we are moving forward and accelerating plans to move my father down here with us. We're looking into various options, but (right now) it looks like the most likely is for him to move in with us. What that means is that we need to move into a bigger house to accommodate him. The Lord (and my congregation!) has been very good to us and so we can afford to do so, it's just going to be a LOT of upset preparing our current house to sell, looking for a new one that will suit our needs, and moving, all while working on school stuff, church stuff, and the various summer activities that come along - including trips! (I get tired just thinking about it!) It will be a relief when it's all done.

So, a full summer ahead!
Posted by Pastor Peasant at 7:12 PM No comments:

My son is on a team in the "Team America Rocketry Challenge" which has its final competition today (weather permitting). Here's a link to the official website. Some 900 teams from around the country participated. The challenge is to get a rocket to fly to exactly 750 feet and come back down to earth in 48-50 seconds with an unbroken raw egg. If the egg breaks it's an automatic disqualification. Any variance outside the exact altitude and time earns you points and so like golf, the lowest score wins.

The top 100 teams from around the country are gathering here for the finals today. One shot for all the marbles. The cut off score to make the top 100 was 16.21 - my son's team scored a 15. So they don't expect to win, but who knows? Maybe everything will go right for them. They had a lot of fun figuring everything out over the year. I'll post an update tomorrow to let you know what happened.

UPDATE: My son's team finished 10th at the national competition! And the great news is that the top 10 all get an invitation to the next step up rocket competition next year sponsored by NASA and taking place in Huntsville, Alabama. Very cool. More information and results on the web site linked to above. 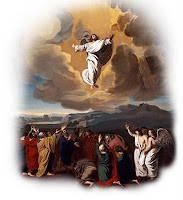 As I was working on my sermon for the Ascension of our Lord, I was thinking about the end of Luke's Gospel which says, "And they worshiped him and returned to Jerusalem with great joy . . ." Great joy. Why great joy? Well, did you know there is only one other time Luke uses that phrase? He speaks often of joy, but of great joy only one other time - when the angel announces Jesus' birth to the shepherds (Luke 2:10). So, great joy when the Son of God comes down from the Father and is born a man, and great joy when that God-man completes His work of redemption and returns to the Father. The "good tidings of great joy" has been fulfilled. Nice Luke! Nice.

Email ThisBlogThis!Share to TwitterShare to FacebookShare to Pinterest
Labels: Scripture

I've noticed it on the train. When I come into school, I take a local commuter train into Union Station and then the Metro up a few stops to CUA. On the train, this is how it works. The first ones on go directly to the upper level of the train, where every seat is a single. Once that fills up, then the doubles seats on the main level begin to fill - but always only one person to a seat. (Unless, of course, they know each other.) Then once all the seats have at least one person, folks will sit with someone else.

That's all fine and well. Even makes some sense, I suppose. But here's what I've noticed in addition to that: if someone is sitting in a double with someone else and a single opens up, they will take the trouble to gather their bags and all their belonging and move to that single seat, so they do not have to sit next to another person - even if it is only for a single stop! (It happened to me three times on my trip in today! And yes, I showered!)

To me, that's strange, bordering on the phobic. Now, that's a word that's tossed around a lot these days - if you speak against anyone's lifestyle you're automatically "phobic." But here perhaps it fits better, for why? Why move? What's the problem with staying in that seat for another stop? Or perhaps it's just individualism run rampant. Are we not comfortable around other people anymore, to that extent?

And then I think of Jesus, who came to be with us - and not just sit next to us for a while, but to hang out with all the undesirables of the world. Folks like you and me. To talk with us, know us, take our burdens upon Himself, and die for us. The incarnation. Jesus in our flesh. And thank God that He did! That we might join that great multitude around the throne and the Lamb in heaven, from every people, tribe, nation, and language, and we won't care who's next to us! They are our brothers and sisters in Christ.

Just something I was thinkin' about this morning . . .

Posted by Pastor Peasant at 10:15 AM No comments:

A Scriptural Feast of Law and Gospel

There are verses in the Bible that sometimes seem to contradict each other. For example, verses that say we are saved by grace through faith alone, and then other verses which say that faith without works is dead. Of course, these are not really contradictions, though they may seem that way to us. I believe it was Normal Nagel who had some good advice about these, and why having both is helpful. He said that if you have a Christian who is in despair about his faith and Christian life, then send them to Paul and the assurance that we are saved by grace through faith alone. Jesus has done it! On the other hand, if you have a Christian who is secure in her sin, thinking that a life of faith is a life where we don’t do anything, send her to James to realize that faith is always working, living and active in good works.

I think there are other sets of verses like this. For example, we read in the Scriptures of those who once believed but have fallen away, yet also verses like in John 10 where Jesus says “no one can snatch them out of my hand.” So which is it? Well, following the above advice, for that Christian who is in despair and doubting whether they will make it to the end in faith, send them to Jesus and assure her of His promise there. On the other hand, if a Christian is secure in his faith and thinks he can sin as much as he wants, send him to those verses of warning to Christians, to beware lest we fall away in sin. Sin is dangerous.

I also think this same can be applied to the last day and the final judgment. That day, we read, all will give an account of what they have done, but it is also described as the Bridegroom coming for His Bride. So which is it? Should we be fearful of that day or look forward to it like our wedding day? Yes. For those Christians fearful because they just don’t measure up (and none of us do!), point them to the joy of the last day! Jesus is coming in great love for you! However, for those (again) who think but lightly of the life they live by faith here and now, perhaps they need to hear those words of Jesus that speak of giving an account.

All this is really nothing more than the proper application of Law and Gospel. Which often sounds easy, but as Luther knew is often very difficult. My point here is simply to point out the feast we have in the Scriptures, and that all of it is needful for us.

Posted by Pastor Peasant at 7:16 AM No comments: 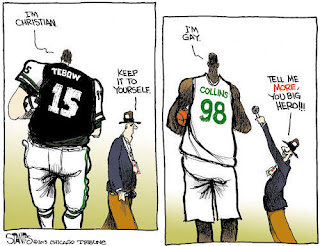