Found this thought on someone's twitter feed: "One sees great things from the valley, only small things from the peak." [GK Chesterton] Think about it.
Posted by Pastor Peasant at 7:44 AM 1 comment:

I attended the ordination of one of the members of my church yesterday - Reverend Chris Yang. This is the second time I have had the privilege of seeing a member of my flock finish seminary and be ordained into the Office of the Holy Ministry. It is not easy, I know, and I am very proud of him and his family for the journey they have taken. I am also proud of my congregation for their help in getting him through debt free. That is quite an accomplishment! But that is a promise I make to my seminarians: I will get them through debt free. My pastor made that promise to me, and I have made it to each of my men. Never sure how it would work, but so far it has. I think it is important that these men be able to devote themselves to their study and not have to worry about the finances. I hope that when one of Pastor Yang's men goes off to the seminary, he will make the same promise to them as well!

It was a great service, as ordinations usually are. Many members of Saint Athanasius were able to attend. Since Chris is called to be the pastor for the Chinese Ministry at his new church, the service was bi-lingual, including the sermon. Very interesting. It was also, I must admit, a bittersweet moment for me: sadness that Chris and his family have now "officially" left the fellowship of Saint Athanasius, but great joy that he is now no longer a parishioner of mine, but a brother in Office!

There was one thing I missed yesterday, though. At my ordination (14 years ago), the moment I remember most vividly was when all my brother pastors gathered around me and, laying their hands upon my head, spoke in unison the Lord's Prayer over me. The sound was thunderous! The weight of their hands on my head was great, the sound of their voices in my ears was deafening, and it was at that moment that the reality of it all sunk it. Yesterday, we prayed the Lord's Prayer, but not like that. That's okay. I wonder what part of the day Chris will remember the most?

Having Chris lead the prayers at the end of the service also brought back to me the memory of the disaster that almost was. It is the practice to have the newly ordained pastor lead the concluding liturgy. But when I was ordained, I had forgotten to prepare any closing prayers! So after the ordination, while the congregation was singing the hymn, I was at the altar, busily paging through the altar book, looking for prayers! (I knew there must be some!) Finally, I found some collects that I was able to pray, much relieved!

So hey - any pastors who may read or stumble across this blog and post - what part of your ordination do you remember the most?
Posted by Pastor Peasant at 8:22 AM 2 comments: 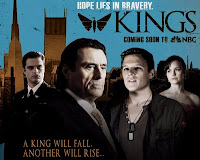 I have started watching this TV show called "Kings" - Saturday nights at 8 pm. It is sort of a modern day retelling of the story of Saul and David. Of course, they take a lot of liberties in retelling the story and elaborate a lot, but I have been enjoying it and looking for the Biblical themes woven throughout.

Saul is currently the king - his name in the show is Silas Benjamin (being from the tribe of Benjamin, after all). David is "David Shepherd" (ha ha!) and Saul's daughter Michal is "Michelle Benjamin." The prophet Samuel is Reverend Samuels. It has been interesting the past few weeks to see how the strife between Saul and David has been portrayed, with Saul becoming more and more paranoid, yet David remaining loyal to his king. This past Saturday had David fleeing to Gath to take refuge from Saul (1 Samuel 21). If you're not doing anything Saturday night, give it a look.
Posted by Pastor Peasant at 8:05 AM 1 comment:

Email ThisBlogThis!Share to TwitterShare to FacebookShare to Pinterest
Labels: TV

One too many repairs for the old car, so we've been car shopping for the past few days. (Do you know how much I hate doing that? Shopping, comparing, haggling, etc.) The internet has made that all much easier, thankfully. Yesterday, the dealer accepted the deal I offered, so we got a Honda Civic. Wanted something with good mileage. Its really nice. Now, hopefully, we'll be set for many, many years to come.
Posted by Pastor Peasant at 5:50 AM No comments:

I simply cannot tell you how cool it is that I have two baptisms this Sunday! How cool will it be? Well, standing side-by-side at the Font will be a two week old baby and an adult woman. What a great picture of the grace of God given to all people the same. What a great confession that God creates faith the same way in infants and adults alike - through His living Word.
Posted by Pastor Peasant at 9:13 AM 1 comment:

Email ThisBlogThis!Share to TwitterShare to FacebookShare to Pinterest
Labels: Baptism

At my District Convention, there were scheduled times when we were given presentations that were titled "This is the SELC." The problem was, we were not really given a picture of the SELC - not the whole SELC anyway. We only received snippets from a few churches . . . the same churches we usually hear about. (Ecclesiastes 1:9 anyone?)
I wish we were given a more well-rounded picture of what the SELC really is. Yes, we have a few large churches, but must we always hear from them? (I know a pastor in at least one of these churches who would like a break from always talking about what they do!) Many of our District churches are gray, old ladies who have been faithful for over a century. Because they are in depressed, declining areas (where mining and factory jobs used to be), their numbers may not be up to "church growth" standards, but they are caring for their people, reaching out to their communities, and doing important and valuable work. Allowing many of them to present would have given a better picture of "This is the SELC" than we got. I wish we could recognize what they do, the many challenges they must face and overcome, and rejoice with them over even one sinner who repents. For isn't that what it's all about?
Posted by Pastor Peasant at 1:48 PM 1 comment:

Yes, today was a "hump day" for me of sorts. Two weeks ago was a week in Michigan for my District Convention. Last week was our Vacation Bible School, and Saturday was our church booth at our town festival. A tough two weeks! But it is over and everything went well. Now I hope that the month of July settles down to a normal routine of preaching and teaching, reading and studying, and playing and swimming with my family. Isn't that what summer's for? And we can also now start planning for our vacation in August!
Posted by Pastor Peasant at 7:37 PM No comments: