Well, it's been a while again. So what's been going on?

Well, our big news, I guess, is that my son got a job! He is in his senior year at Western New England University in Springfield, MA and so beginning the whole applying and interviewing process. Last week he had an interview at BAE Systems in nearby Manassas, VA. So he took the train down on Monday, had his interview on Tuesday, and took the train back to school on Wednesday. He said the interview went well and they really liked his experience both in and out of the classroom. Well, by the end of the week, he got the job! So now he can relax and enjoy his senior year without having to worry about a job after he graduates. And we get the bonus of having him close by - at least for a few years. We'll see where his career takes him after that.

Before getting that job, my son asked us if we were interested in selling him our Honda Civic - he would need a car to go on his job interviews. Well, we weren't in the car market and I really like my Civic, but as we thought about it, it made sense. He needs a car and was willing to pay more than what we would get trading it in. We could sell it to him for less than what he could buy a similar car for in the market. And we had some money saved . . . so we went ahead and got a new car - a 2017 Toyota Corolla. We have a Toyota minivan and really like it. It's been pretty dependable. And we got a good deal on a 2017 closeout. So now we have a new car and my son has a car to go on job interviews he doesn't need to go on anymore! :-) 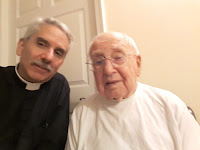 The third thing is that my father took a rather large step down the last few days. He is noticeably weaker and spends less time awake and alert. It happened rather suddenly. I guess that's the way things go at his age. So we're keeping a little closer eye on him now. To the right is the latest picture I have of us together. He's been doing pretty well of late - I guess he's just starting to wear out. He's having trouble even getting through a whole devotion with us now.

Finally, I have a question for anyone who has read this far: When Luther wrote in his hymn A Mighty Fortress "one little word can fell him," what is that one little word? I have heard a number of suggestions from a number of people: Jesus, Christ, grace, forgiveness, tetelestai (Greek for "it is finished"), gegraptai (Greek for "it is written"), just to name a few. As far as I know, Luther never specified in his writings what that word was for him. What do you think? What do you think it is? :-)

Have a great Tuesday - officially the 500th Anniversary of the Reformation today!

Just some thoughts on a Tuesday morning . . .

My wife and I are transitioning to using an electronic calendar for all of our stuff. I have been resisting and using my paper one, but it is getting harder and harder to coordinate her stuff, my stuff, and family stuff that way without one central calendar that I can access wherever I am. So, we're moving. It'll take some getting used to, but I know will be beneficial in the long run.

Preaching. I was privileged to preach at my District's Professional Church Workers Conference last week. Know what I noticed? How much easier it is to preach in a church, from a pulpit, than preaching in the house church that we are forced to use at the moment, due to our building still being under repair. I have found it quite challenging preaching in that environment. I can't quite put my finger on why, but it was just so much easier in the church.

And speaking of our church, no, repairs still haven't begun. The contractor is still talking with (haggling?) the insurance company(ies). Hopefully soon. I am getting very worried now about mold in the building, and that even when repairs to the roof are made, that will only be the beginning of the problems.

I also think I understand why District Presidents tend to be full time and not also serving as pastors - it's not the time it takes so much as the emotional toll. A pastor hurts for his people, and a District President hurts for his pastors and congregations. I experience some of this as a Circuit Visitor. It's not easy. You can insulate yourself to a degree, but its still tough to bring bad news to a congregation, or to work with a pastor who is hurting.

My wife - what would I do without her? Without her forgiveness, understanding, unwavering support, encouragement, management, care, and wisdom? I don't even want to think about it. :-)

Posted by Pastor Peasant at 9:18 AM No comments: