Back Home, Tired, and An Interesting Tidbit

Well, I am back home after three long days cleaning out my father's house. We got it almost all done! We have a buyer lined up, and my cousin (a lawyer) and his wife (a realtor) are taking care of the sale for us. It will be nice to have that taken care of. But boy am I tired this morning! The neat part was that we came across a family (a mother with four boys) who had just gotten a house and had next to nothing in it. So we were able to give them lots of things - 12 boxes of kitchen things and lots of furniture. They were so happy and grateful. Then there was a young lady down the street who also just bought her first house and need to furnish it. So we gave her quite a bit too. Nice to know the stuff went to folks who needed it and will appreciate it. 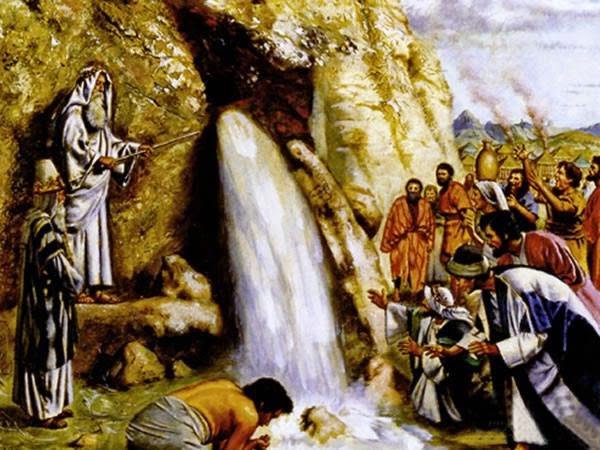 Now, the interesting tidbit: The Old Testament reading for Morning Prayer today was Moses striking the rock to provide water in the desert for the people of Israel (Exodus 17:1-7). Paul tells us (1 Corinthians 10:4) that "the Rock was Christ." And this was the water that gave the people life - water from the side of Christ.  . . .  Sound familiar? John tells us (John 19:34) that after the soldier pierced Jesus' side after He died on the cross, out came blood and water. Water from the side of Christ which gives life to His people wandering in the wilderness of this world and sojourning to the Promised Land of heaven.

Posted by Pastor Peasant at 9:33 AM No comments: 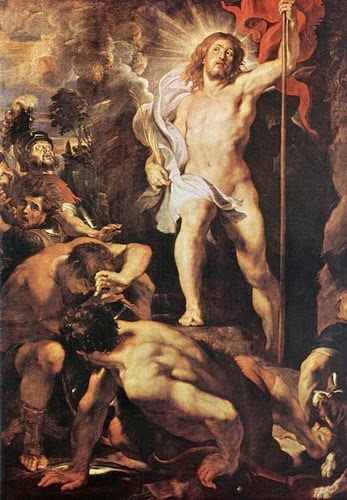 Christ is risen! He is Risen indeed! Alleluia!

I pray you all had a good Holy Week and a wonderful celebration of the resurrection of our Lord today. My week was very good. As I said in a previous post, it was a week spent in God's Word, meditation, and prayer, writing many meditations and sermons. The services gave the the truth - both the truth of our sin but even more, the truth of our forgiveness in Christ's death and resurrection. And the culmination today with our Festival Divine Service. A very good week.

I usually manage to strain my voice by the end of the Easter service, but this year we have a new wireless microphone (thanks Dave!) and I love it! I can speak normally and be heard! What a great thing.  :-)

My wonderful wife made my Easter lamb for dinner tonight! I look forward to this every year.

Tomorrow I travel up to my father's house where my brother and sister and I will begin boxing and cleaning out the items still there. I usually try to play golf the Monday after Easter to take a day off and rest my head, but this will be a good break as well. And it will be good to spend a few days with my brother and sister. So a good nights sleep and then off to Philly in the morning.

Posted by Pastor Peasant at 7:31 PM No comments:

In years past, Good Friday was a day of - how to say it - respect? There was not much activity on this day. There was quiet. Many did not have to work. It was a different kind of day.

But now it is quite different. Ordinary. Normal. Most people I know go to work. There is the sound of lawn mowers, construction, trucks, and much else.

Now, I know that as our nation slides farther and farther away from Christian truth, this is what will be. Still, I find myself yearning for the days of old . . .

Do I condemn those who work? No - many of my own people must. They are fulfilling their vocation in service of their neighbor. And isn't that what Jesus did on this day? For us. Laying down his life for us.

Now true, if we do it only for money, only for our own selfish gain, then we are thinking and doing wrongly - not only this day but every day. But when done in faith, everything is pleasing to God. So in our vocations, we serve others, even lay down our lives for them.

So do I wish folks had off on this day? Yes, to be a day spent in God's Word, meditation, and prayer. But if you must work on this day, don't feel guilty or ashamed. Rather, while you work, remember your Saviour who worked for you. Who in loving service stripped off His garments and washed His disciples feet. Who in loving service had His garments stripped off of Him and was hung on the cross. And thus are you doing for others. Especially if you'd rather have the day off, but can't.

God bless you. You will be in my prayers.

Posted by Pastor Peasant at 9:29 AM No comments:

We Must Eliminate the Cross

While showering and listening to the news this morning that is the quote I heard, spoken by one of Al Qaeda's leaders. When the announcer asked his guest, a so-called terrorism expert, on the meaning of that phrase, he would say nothing about Christianity or Islam - only that they are threatening America.

The humorous thing in all this is, they still consider America a "Christian nation." I know there are reasons for this in their theology, but honestly, really? I'll leave that debate for another day, but here's the whole story below. I could not find it on that radio station's web site, but found a similar article on the NY Post web site and copied it - because I would not be surprised at all to find this line excised from the reports later. I wanted to make sure I captured it. So below is their story with not additions or deletions (bolding emphasis mine):

This gathering in the desert is no Coachella — it looks more like a full-scale Allah-palooza.

A new video popping up on jihadi Web sites shows some of al Qaeda’s most dangerous terrorists smiling and glad-handing each other at a terrorist conclave in Yemen, CNN reported.

The video, which features al Qaeda crown prince ­Nasir al-Wuhayshi addressing more than 100 fellow terrorists in the arid hinterlands, is being analyzed by US authorities.

It was unclear if the CIA was aware of the conference, which could have been an inviting target for an anti-terror drone strike, CNN said.

Al-Wuhayshi, the leader of Al Qaeda in the Arabian Peninsula, at the meeting delivers a rousing speech to jihadists, clearly aiming his rage at the United States.

“We must eliminate the cross,” al-Wuhayshi says. “The bearer of the cross is America!”

The notorious terror master walks around with a swagger that shows an apparent lack of concern about the possibility of a drone strike, CNN said.

The video popped up ­recently on the Web, and US officials and terrorism experts said they believe it’s authentic.

Al Qaeda in the Arabian Peninsula is considered the most dangerous al Qaeda affiliate and is a constant target of US drone strikes.

US officials would not comment to CNN about the video.

Posted by Pastor Peasant at 6:44 AM No comments:

Well, haven't felt like posting to the ol' blog of late, but thought that I'd post some Holy Week thoughts . . .

I really love Holy Week. There's so much hubbub around Christmas, so many extra activities that make it such a hectic time of the year. But Holy Week is different. For me it is very meditative, spending so much time in the Word, thinking and writing.

We had brief online Vespers services again this year for Monday, Tuesday, and Wednesday. I did this last year, reading through the Passion accounts of the various Gospels. This year we read through sections of John chapter 12 - the Gospels assigned for this time of year, and I wrote brief meditations on them. You can read them here.

Tomorrow I have to go to pick up the chairs we are renting for our regular Holy Week services and set up the house church where we will be. Yes, a house church, because we cannot use the church we rent for Sunday mornings during the week. So each Holy Week we have to set up at a different location. This year is a new location, so in addition to renting chairs, I need to go and figure out the logistics of it all. It makes it all a bit harder - both for me and for the folks - but that is what we must do. Someday, perhaps, we will have our own building . . .

Private Absolution tomorrow night as well. An hour before the main service in the evening. A very good way to begin the Holy Week observances.

I occasionally watch some of the big services that go on at the Vatican on their YouTube channel. I have them on in the background while I'm working on other things. Helping me to learn Italian! (Like I need to learn yet another language! :-) But seriously, one of the things that always strikes me is during the reading of the Passion story - St. Peter's square is packed solid with people, but right after the reading of Jesus' death, everyone drops to their knees and you can hear a pin drop! And they stay that way for some time in meditation. Now, I still disagree with Rome on some of their theology, but I gotta admire that piety.

I also like listening to the St. John Passion this week. It is - bar none - the greatest work ever written, in my humble opinion. If you want to see one of the finest performances of it, go here. You will not regret it! (Note: The close captioned translations of the German are not always the best, but they give you the gist. Also, there's a bit of a hiccup around 22:50 - not sure what that's about, but it doesn't last too long.)

Posted by Pastor Peasant at 8:19 PM No comments: