Well, the 89 seconds I spent filling out my NCAA tournament bracket were a wasted 89 seconds of my life I'll never get back.  :-(  Granted, I picked some daring upsets (like the first 16 over a 1, cuz it has to happen someday!), but Syracuse? Really?

The good news is . . . Villanova! That's my team. My father went there for college back in the day, and we've been fans ever since. The last couple years have been tough to watch their early exits, but they made it this year. Hopefully they have a couple more victories in them and you'll be hearing this song lots more! (Sorry for the ad at the beginning - just skip it.)

Today is golf! The day after Easter I like to go out and just do something mindless for a few hours. And yes, I know, while all you golf aficionados will tell me that golf is a cerebral game, let me tell you - not when I play it! :-) So hopefully the rain will hold off, the sun will come out, I won't lose too many balls, and maybe even make a par or two . . .

Posted by Pastor Peasant at 5:50 AM No comments: 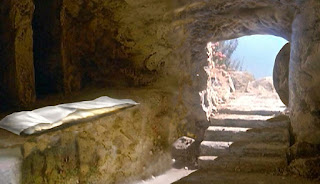 He is not here; He is risen, as He said.
Alleluia! 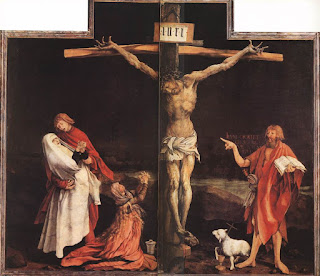 A happy coincidence this year is that Good Friday falls on March 25th, which is also the Feast of the Annunciation - the commemoration of when the angel Gabriel came to Mary and announced to her that she was to be the Mother of God. So this year, Jesus' incarnation and death are remembered on the same day. (Actually, liturgically, the celebration of the Annunciation will be transferred to after Easter, but you get the point.) Jesus was born for this, to die for us.

Why was March 25th selected as the day to remember the Annunciation? Some folks think it is because it is exactly nine months before Christmas. That would be a good reason. But it's actually the other way around! Christmas is on December 25th because it is nine months after the Annunciation. In ancient times, it was (yes, erroneously) believed that a person died on the day he or she was conceived. It is known that Jesus died on Passover, and so calculations were done and it was determined that He died on March 25th. So that was, then, the day He was conceived, and His birth was then celebrated nine months later.

You see, our calendar in many ways revolves around Christmas. How many shopping days til Christmas? It is the highlight of the year, what the rest of the year builds up to. But it was not always so. It is actually a relative late-comer to the Christian year of festivals and commemorations. Easter, the Ascension, and Pentecost being the first established.

It is factually correct that Jesus died on March 25th? Who knows. That's not really the issue. The Church is not claiming this fact is true, just that it is the day that has been chosen to commemorate a true event, and there were reasons for selecting that day. And this year, that day, today, is filled with significance as we also remember our Lord's death for the sin of the world, for the life of the world. God's richest blessings to all of you as we meditate on that wonderful work today.

Posted by Pastor Peasant at 5:36 AM No comments:

I am once again participating in the Walk-Run-Ride for Life to support the Assist Pregnancy Center. Please sponsor me to help raise money for the important work these folks do in helping mothers keep and care for their babies and speak up for life. CLICK HERE to go to my fund raising page. Also take a look at the other members of Team Athanasius and consider sponsoring them too. Thanks!

Posted by Pastor Peasant at 2:20 PM No comments:

Yesterday, St. Patrick's Day, was the 92nd anniversary of my father's birth. A couple of pictures . . . 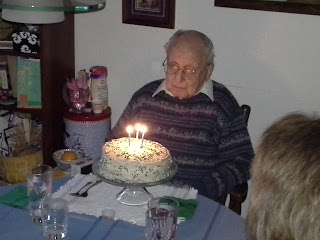 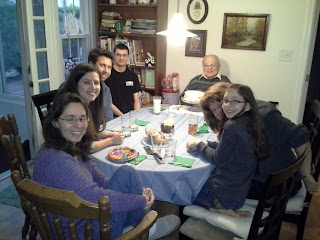 My older daughter had to work and so was not with us for dinner, but my son was home from college for Spring break, my sister came down from Connecticut, and my niece and her husband were able to join us, too. So a good group and a nice celebration.

Posted by Pastor Peasant at 9:31 AM No comments:

This one was sent to me by my sister: Skydiver Meets His Maker

Some pictures from the installation Saturday at Ascension Lutheran Church in Montreal . . . 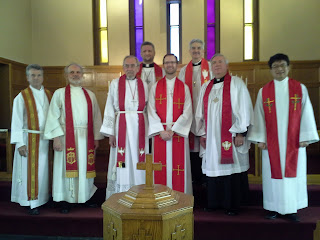 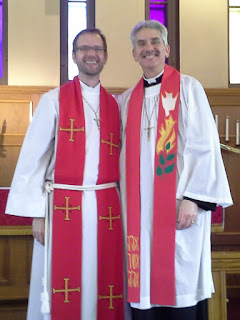 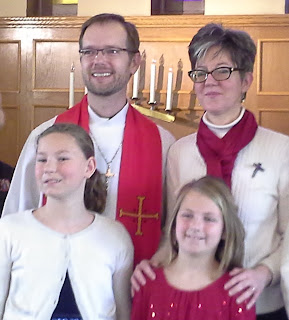 The difficult thing about this trip was that I didn't sleep well Friday night at the hotel, had a long day Saturday, had a late flight home, woke up early Sunday morning to get my stuff together, AND lost an hour of sleep due to the start of daylight savings time! Then, in addition to Private Absolution, Bible Class, and the Divine Service, had two catechism classes this afternoon. I'm tired. :-)

But I am thrilled to have Pastor St-Onge in our district and circuit. He will be a real asset for us. Now I'm going to finish a few more things up and off to bed!

Posted by Pastor Peasant at 7:35 PM No comments:

On the Road Again

I am off to Montreal for a quick trip, leaving this afternoon and returning tomorrow night. Am going for the installation of a new pastor for our congregation there. I am so excited to have him at this church and in my district and circuit. Pastor St-Onge is not only a good friend, great pastor, and a scholar, he is exactly what this congregation needs. So it will be a joy to participate in his installation tomorrow. 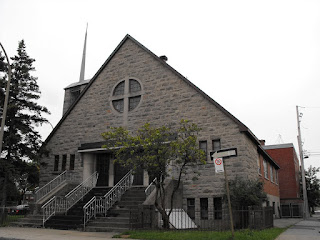 I first met Pastor St-Onge when he was graduating from the seminary. I was receiving my STM the same day and we were able to talk about the congregation he was called to: my parents' congregation and the one I grew up in, St. Mark's in Ridley Park, PA. He served there a number of years, including taking care of my parents' during my mother's final days on earth. For his care and faithful preaching those years, I will be ever grateful.

It will be a tiring weekend, as not only am I taking this trip, but Daylight Savings Time begins this weekend and I will lose an hour of sleep! Ugh.  :-)

Posted by Pastor Peasant at 9:51 AM No comments:

A retired guy sits around the house all day, then one day his wife says, “Joe, you could do something useful, like vacuum the house once a week.” The guy gives it a moment’s thought and says: “Sure why not. Where’s the vacuum?" Half an hour later, the guy comes into the kitchen to get some coffee. His wife says, “I didn't hear the vacuum running,  I thought you were going to do the vacuuming”? Exasperated, Joe answers,”The stupid thing is broken, it won't start. We need to buy a new one”. “Really”, she says, “show me - it worked fine the last time”.