Today a retired Army officer came over to recognize and honor Dad for his military service. My Dad flew in a B-17 rescue squadron in the South Pacific in World War 2. Here are a couple of pictures: 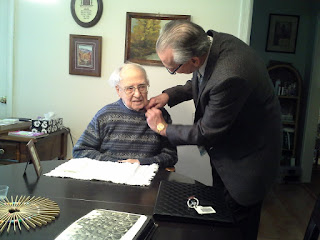 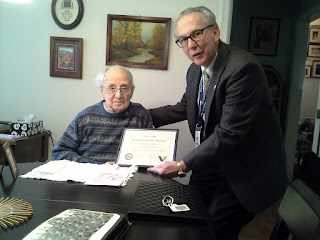 Dad enjoyed getting to talk about the old days with a fellow veteran for a bit. It was very nice for them to come and do this for him.

An interesting series of events and readings of late . . .

First, a few weeks ago, I met a woman named Paula on the DC Metro. She was upset and I helped her out a bit then, and have a couple of times since with a place to stay and with some food. I found out later that she was a plaintiff in a rather large lawsuit with a lot of other women, which settled with a hospital in our area. She is due something like $7.5 million, which I believe she is to begin to receive soon. But until then, she needed some help. That's all fine, but here's why I bring her up: the pastor of the church she was attending said to her that God told him that she should give him (or his church) $1 million. . . . She's not going to that church anymore.

In the readings for Morning Prayer today, money was front and center. Balak, the king of Moab, tried to get Balaam to curse Israel for him and promised him great riches to do so. But Balaam replied: "Though Balak were to give me his house full of silver and gold, I could not go beyond the command of the Lord my God to do less or more." Then, right after that, we read of Judas agreeing to betray Jesus for money . . .

Finally, in the adult Bible Class yesterday, this from Proverbs:

Blessed is the one who finds wisdom [Christ],
and the one who gets understanding,
for the gain from her is better than gain from silver
and her profit better than gold.
She is more precious than jewels,
and nothing you desire can compare with her (Prov 3:13-15).

How often money steals our hearts and becomes a false god. I am grateful that among the myriad temptations that I face each day, money is not one of them. The Lord has provided me and my family with all that we need - sometimes more and sometimes less - but we've always been in a position where we can be generous with our money and give. And I like doing so. My wife handles the finances for us and tells me when to slow down and cool it. But she's the same way. I remember Luther and Katie being like that as well.

So why do I bring this all up? I don't know - just because it was interesting how those four things all came together over the past couple of days.

Posted by Pastor Peasant at 10:07 AM No comments:

This past weekend was our annual Good Shepherd Seminar. This year we had Rev. Jim Bushur from the seminary come out and teach us. It was very, very good. The audio files of his presentations have been posted on our web site. I very strongly encourage you to listen to them - it will be well worth your time. Click here to go to the page with these files (and also files from many of the other years of our seminars).

In other news, my father is still hanging in there. He has his good days and bad days, good moments and bad moments. We are just still waiting to see what the future hold. The hospice doctor is coming over soon, so hopefully we'll get some clarity as to what is happening.

My son comes home from college for the summer this week. It will be nice to have him home again for a while. My daughter is making preparations for her first year of college this fall at Virginia Commonwealth University. It will be a big change to have them both gone in the Fall!

My Phillies are still doing pretty well for a rebuilding club. They are ahead of schedule, playing above .500 ball, and have many exciting youngsters in the minors ready to come up either this year or next. The future is looking bright! I think the same could be said with the Eagles - they got some good free agents and have some good talent if they can stay healthy. All will depend on the quarterback of the future, Carson Wentz, working out. We shall see.

I guess that's about it. Again, make sure you go listen to the seminar. Really. Go. Listen. Really. Now. :-)

Posted by Pastor Peasant at 11:02 AM No comments: