In confirmation class with people, I tell them point blank, straight up, when we study the Ten Commandments: "I am trying to crush your self esteem." (If you don't think this is the purpose of the Ten Commandments, see Romans 3:19-20.) For their self-esteem should not come from themselves or what they do, but from Christ and the fact that He died for them. That makes them worth far more than anything they could ever do! I tell them this so much, in fact, that they begin to joke about it. But the point is made, and they get it.

So, one of the young ladies in my confirmation class found a self-esteem exercise for girls on the web. As you can see from the picture (sorry the scan didn't turn out better, but if you click on the picture you can view a larger image of it) you're supposed to write inside the letters "ME" what makes you special. 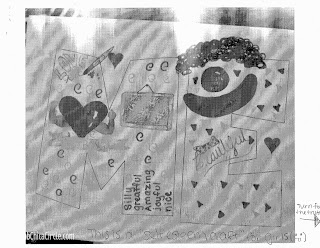 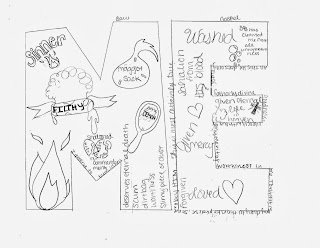 Awesome. I did not ask her to do this. She just brought it in one day. Warms a pastors heart! :-)

Email ThisBlogThis!Share to TwitterShare to FacebookShare to Pinterest
Labels: Confirmation, Law and Gospel

How to Do a Church Budget

Last night was our regularly scheduled church budget meeting. For the past number of years now, instead of trying to hash out the budget in a meeting after church when everyone is eager to go home and watch the football game, I invite the Executive Board over to my house for a dinner meeting. My wife cooks up a great feast, we enjoy some beer and wine with the meal and enjoy each other's company, and then after a wonderful dessert, get started on the budget. And you know what? It goes really smoothly! I am happy to say that our missions budget is now well over ten percent of our total budget. That is a goal I've been working toward. In the past years we have given more than ten percent because we've given away some of our budget surpluses, but this is the first year we've actually budgeted over ten percent. A lot of that is going to our seminarians, for we have both a pastoral ministry student and a deaconess student, and the seminary asks for a lot of support for each of them, but we are happy to do so. Now, we aren't the biggest church and we don't have the most complicated budget, but I never dread these meetings. They are always high on collaboration and we're all on the same page. And yes, it is a deficit budget, but less than previous years. And I applaud my leaders for not cutting missions just to make the budget balance. We just go forward in trust that the Lord will provide. He always has, and we believe He always will. So well done, Executive Board!

Email ThisBlogThis!Share to TwitterShare to FacebookShare to Pinterest
Labels: The Church, Thoughts

The topic of day 2 of my conference was Disaster preparedness and response. There were many presentations, some good, some too long, but overall not a bad day. I did find out some things I did not know - like, who knew we had "LERTs" (Lutheran Early Response Teams)? We were also told of how we can be certified to be involved in future disasters and needs. But the best thing was that instead of having the scheduled 4:30-5:30 block of reports on synod and district matters, we got an extended break before dinner! We needed it.

Divine Service was after dinner. Unfortunately, we couldn't just use the Divine Service, it had to be made "more meaningful" by changing things up. So, we had to have ten minutes of explanation before we even started about what we were doing and why. Don't you think that's a big red flag that something's off? After that, we used a confession that was four pages long! And I learned that "fear of anything new" was a sin - who knew? Next two readings from Scripture, but the "explanation" of the first was longer than the reading itself! (Again, isn't that a big red flag that something is amiss?) President Harrison preached, and I appreciated his sermon. Sadly, the only liturgy for the Sacrament were the Lord's Words - nothing else! Not even a pax domini or an agnus Dei. Sigh. Can't we just use the service we all know and are familiar with and so feed your pastors who rarely get to sit and be fed?

Today we have President Harrison present on things and I guess have a Q&A. We'll hear about the Health Plan stuff after that, which should be interesting given all the changes to the laws of late. The DP promised those guys who didn't present about their mission trips yet the time to do so, so it will be a full morning. The conference ends at noon, and then off to the airport for the flight home. If all goes well, I think I will be home for dinner.
Posted by Pastor Peasant at 6:04 AM 3 comments:

No, not the president (as in Grover, I know that's what you were thinking, right?) but the city. That's where I am for a Pastoral Conference. Got here Monday night and leaving Thursday. In between they have the days packed completely full with presentations. We leave the hotel for a local church at 7 am and get back sometime after dinner. Yesterday, the first morning session was by development people, so I got some sermon thinking done and some thoughts done on my computer.  :-)  After that, we had two sessions from a pastor who has a new book on demons and spiritual warfare. He was very good and consistent in his theology and the power of the Word of God being our only power and weapon. He was worth listening to. I got to sit down with him during lunch and talk a bit, which was nice. Later in the afternoon got kind of preachy - we had guys presenting about missions trips they were organizing and leading to different countries. Good stuff, but a bit too long and as I said, preachy. Got tiresome.

It is good (always) to reconnect with guys I haven't seen in a while. Have had some nice conversations. I'm not sure how today will be. We'll see, I guess. Perhaps I will get some sermon writing done!
Posted by Pastor Peasant at 6:31 AM No comments:

Thanks to the tech guys in the congregation, our web site is up and running again . . . mostly. We will have to rebuild some things, which will take time, but at least it is mostly up and running again, and on a new and faster host. Thanks guys!
Posted by Pastor Peasant at 8:43 AM No comments: 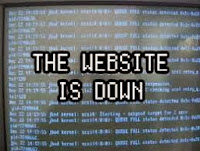 We lost our church web site rather unexpectedly yesterday. If you were looking for it, hopefully it will be mostly up and functional soon. Part of it (the sermon archive) I think we will have to rebuild. I was worried that this day was coming (I won't go into the reasons) and had some folks at church looking into it, but it came sooner and more suddenly than expected. Thankfully I have good guys who got right on it and so the downtime should not be long.  :-)
Posted by Pastor Peasant at 7:36 AM No comments: