A new survey on the Synod's restructuring report is available for everyone to take and add your comments and opinions. Click here to go and take the survey - let your voice be heard! And please pass the word - the more input and participation, the better.
Posted by Pastor Peasant at 11:22 AM No comments:

Email ThisBlogThis!Share to TwitterShare to FacebookShare to Pinterest
Labels: Synod

Last night was "Call Night" at Concordia Theological Seminary - the night when those men who are completing the preparation and formation receive their call into the Office of the Holy Ministry. Many do not know where they will be going until they hear their name and assignment announced that night. Every Pastor remembers that night - it is the culmination of a lot of work, and the beginning of much more! It is a joyous time.
Last night two of my congregation's adopted seminarians should have received calls. One did, one (it appears) did not. I would like to put the best construction on this, and say that his call is pending, that there weren't enough calls for all the men, or something like that. But it seems that there may (again) be retribution behind this - that he is being penalized for activities that he has done in the past. You see, before he entered the seminary, this man was very active and vocal in synodical politics. Those who now hold positions of responsibility and authority in our synod (notice I did not say power) did not like his activities, and (it seems) are letting it be known. I hope I am wrong. If I am shown to be wrong, I will gladly issue a retraction here, with my repentance and request for forgiveness. But right now, my heart is heavy for this man and his family, and I fear the worst. And I am saddened that something like this would happen in our synod.
Posted by Pastor Peasant at 8:56 AM 1 comment:

I have the utmost respect for the folks who serve and protect us in the military. I have several current and retired service members in my congregation. I myself never served in the military - I'm no good at taking orders, though maybe I could have learned. The Navy SEALS have been in the news this week for their professionalism and skill in rescuing the captain of the Maersk Alabama, but I have seen this professionalism and skill in all those who serve. The vocation of soldier, marine, sailor, and airman is a good and honorable one, and I am thankful for all who serve.
Posted by Pastor Peasant at 7:57 AM No comments:

Email ThisBlogThis!Share to TwitterShare to FacebookShare to Pinterest
Labels: Doctrine and Life, Vocation

A great day today. The Divine Service for the Resurrection of our Lord just can't be beat - the culmination of a week of wonderful time spent in the Word, meditation, prayer, and receiving the gifts of God. New white paraments today added to the beauty of the chancel. Now, some rest. No meetings or classes this week. I hope I'll get to spend some time outside this week too. Thursday I have a meeting with the folks at Catholic U. about my Ph.D. program - I am looking forward to that. Next week I start back in with Latin (my teacher took some time off to have a baby!), and then in a couple of weeks our Good Shepherd Seminar with Prof. John Pless. It's going to be a good month!
Posted by Pastor Peasant at 3:17 PM No comments: 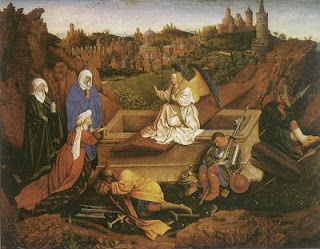 He is not here. He is risen, as He said!
A blessed celebration of the Resurrection of our Lord to you all.
Divine Service at 10:15 am
Posted by Pastor Peasant at 4:51 AM No comments:

In the post that follows this one, you will see an album cover for Palestrina's Lamentations. Besides being a wonderful piece of art, the music is beautiful and a great way of relaxing and meditating on this day of our Lord's Sabbath rest in the tomb. I highly recommend it! (Available from the iTunes music store, if you want to go get it!)
Posted by Pastor Peasant at 11:38 AM No comments:

Email ThisBlogThis!Share to TwitterShare to FacebookShare to Pinterest
Labels: Music 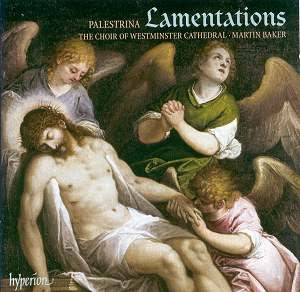 A Blessed Holy Saturday to you all.
Join us for the Great Vigil of Easter, 7:30 pm
at the home of Jonathan and Viviana Malekzadeh
[click here for directions]
Posted by Pastor Peasant at 8:26 AM No comments: 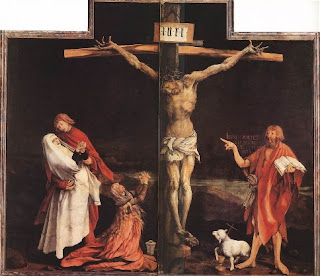 Behold the Lamb of God who takes away the sin of the world!
May God bless your time in His Word, prayer, and meditation this day.

Joins us for:
The Way of the Cross, 12:30 pm
at Greenspring Village
[click here for directions]

Tenebrae Service, 7:30 pm
at the home of Jonathan and Viviana Malekzadeh
[click here for directions]
Posted by Pastor Peasant at 8:39 AM No comments: 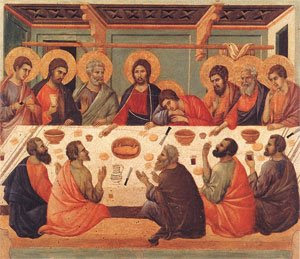 A blessed Holy Maundy Thursday to you all.
Divine Service this evening at 7:30 pm
at the home of Jonathan and Viviana Malekzadeh
Click here for directions.
Posted by Pastor Peasant at 8:48 AM No comments:

Paul McCain points out on his Cybrebrethren blog that the ELCA has come out with a Bible they are also calling "The Lutheran Study Bible" - don't be confused! There is a vast difference between the ELCA version and the one coming this Fall from CPH. McCain gives one excerpt on his blog and you can see for yourself the tremendous difference in quality and orthodoxy. Our congregation is taking orders for the one you will want, from CPH. Please let others know about this and warn them. Thanks.
Posted by Pastor Peasant at 4:31 PM 1 comment: