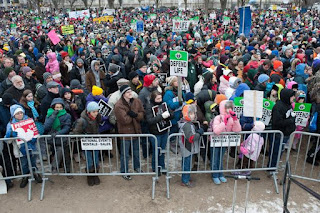 Went to the March for Life yesterday. It was a good year this year. I think the 40th anniversary of Roe v. Wade brought more people out. Also had more than the usual number of Lutherans due to the Life Conference taking place today. I was talking to one of the speakers who said they are going to do a conference like this every year in conjunction with the March - I hope so! It will be good to get more Lutherans here every year to participate. Sadly, though, we weren't really organized and got split up during the March and so didn't stay together as a group.

Got to catch up with some friends as we walked, which was nice. It was cold and snowed a lot of the way - but I was bundled up well and the snow really made it pleasant. But the March is always pleasant! The people who March are always upbeat and positive - there's rarely anything untoward. Maybe because we're marching in love for something instead of angrily against something. I don't have a picture of our group, so the generic picture above will have to do. We didn't get a good group picture at the end of the March like usual - I think because there were more of us than usual, we got split up, and it was still very crowded around the Supreme Court when we arrived. But a good day, all in all.

UPDATE: Here are some pictures of the Lutherans in the March. Like the nice neon green hats? :-)

Lord God, bring an end to the horror of abortion in our day, that all people you create be loved and welcomed into the world as a gift from you. Amen.

Posted by Pastor Peasant at 6:20 AM No comments:

Praying for the President, Part II

A follow up post from yesterday . . . Here is a prayer (HT: Father Z) to pray for the president:

“…assist with Thy Holy Spirit of counsel and fortitude the President of these United States, that his administration may be conducted in righteousness, and be eminently useful to Thy people over whom he presides; by encouraging due respect for virtue and religion; by a faithful execution of the laws in justice and mercy; and by restraining vice and immorality.”

Email ThisBlogThis!Share to TwitterShare to FacebookShare to Pinterest
Labels: Prayer

This day takes over the DC area unlike other parts of the country. In Indiana, I'm sure it will be mentioned on the evening newscasts, but here, the local news stations have wall-to-wall coverage, some starting at 4 am! Truthfully, it gets tiresome. We'll be having a Bible Study during the event, so I won't be watching. No, it is not a special study for that reason, but our regular Monday afternoon Psalms study. But it will be good to have our minds on Scripture and not on the craziness and obsession of the inauguration. And at our Bible Study, as well as in Morning Prayer this morning and in church yesterday, we will pray for our president, that our good and gracious Lord grant him wisdom and strength to fulfill his vocation with honesty and integrity and for the good of all people. We may not always agree with him or like what he does, but he needs our prayers. And it is the best thing we can do for him (or anyone!) as Christians - bring him before the throne of our Father in heaven.


First of all, then, I urge that supplications, prayers, intercessions, and thanksgivings be made for all people, for kings and all who are in high positions, that we may lead a peaceful and quiet life, godly and dignified in every way.

Posted by Pastor Peasant at 7:34 AM No comments:

Not For All the Money in the World