A Little Fun for Halloween

I was thinking of the Reformation today . . . and the great seller of indulgences, John Tetzel . . . and I wondered . . .

If John Tetzel was to be reincarnated in our day and age, who would he be? 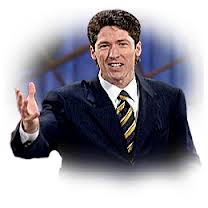 Can any of you who read this blog think of any other good reincarnations? Who would they be today?  :-)

A good writing by Luther in the Treasury of Daily Prayer today. Here's part of it. (When Luther speaks of the "son of a king," I think of the ruckus in the media whenever Princess Diana or Prince William go to other countries and help causes.)

There is no greater bondage than that of sin; and there is no greater service than that displayed by the Son of God, who becomes the servant of all, no matter how poor, wretched, or despised they may be, and bears their sins. It would be spectacular and amazing, prompting all the world to open ears and eyes, mouth and nose in uncomprehending wonderment, if some king's son were to appear in a beggar's home to nurse him in his illness, wash off his filth, and do everything else the beggar would have to do. Would this not be profound humility? Any spectator or any beneficiary of this honor would feel impelled to admit that he had seen or experienced something unusual and extraordinary, something magnificent. But what is a king or an emperor compared with the Son of God? Furthermore, what is a beggar's filth or stench compared with the filth of sin which is ours by nature, stinking a hundred thousand times worse and looking infinitely more repulsive to God than any foul matter found in a hospital? And yet the love of the Son of God for us is of such magnitude that the greater the filth and stench of our sins, the more He befriends us, the more He cleanses us, relieving us of all our misery and of the burden of all our sins and placing them upon His own back. All the holiness of the monks stinks in comparison with this service of Christ, the fact that the beloved Lamb, the great Man, yes, the Son of the Exalted Majesty, descends from heaven to serve me.

The storm is pretty much over for us - maybe just windy today. Never lost power! Last night we had some pretty good wind, but (my guess) the really bad "derecho" storm we had the end of June got rid of all the weak trees and limbs so there was less for this storm to knock down. In any case, I'm thankful. Many, many others aren't so fortunate. Fires, floods, storm surge, blizzard. We'll be praying for them.
Posted by Pastor Peasant at 7:33 AM No comments:

Well, so far there's been steady rain - nothing torrential, really - and lots of wind and some pretty good wind gusts, but so far, no real damage from the hurricane. As you can see, we still have power and things have been pretty good. They say the worst winds are still coming tonight, so I still expect we'll lose power sometime, but we'll see. But so far it's been good here in the DC area.
Posted by Pastor Peasant at 7:30 PM No comments:

Haven't been blogging much lately . . . just haven't felt like it. Maybe soon. But in the mean time, here's a good article for you to read: 10 Questions Never Asked. But CAUTION - there is a very graphic picture that begins this post. It is good to see, to remind us what we are fighting for, but very graphic and sad at the same time. Click here to go and read.

This is hilarious! (From NBC Sports Web Site):

If you recall from Monday, Tim Tebow sent out the following tweet as the Jets prepared to meet the Houston Texans:
@TimTebowLooking forward to giving God all the glory in tonight’s 666th Monday Night Football Game. Romans 8:37.39.
We had some fun with that, noting that 666 is known among some religious folks as the “mark of the beast”, and the Bible passage Tebow listed made reference to angels, demons, and the power of life and death. We closed by wondering, what does it all mean? We also slept with the lights on that night.
Then we got a look at Mark Sanchez’s post-game passing stats (thanks to reader myopinionisrighterthanyours for the heads-up).
Following Monday’s loss to Houston, Sanchez had 6 touchdowns, 6 interceptions, and a net yards gained per passing attempt of 6.0.
*Begin ominous music*
His longest pass of the season went for, you guessed it … 66 yards.
*Music swells. Beads of sweat form on writer’s brow*
And Sanchez’s passer rating is now … no, it can’t be …
*Music stops. All is quiet*
… 66.6.
*Ahhhhhhhhhhhhh! (/door slams shut by itself. Laptop levitates)*
It’s all right here if you don’t believe me. I still don’t know exactly what it means, but I’ve blocked Tebow on Twitter and am currently stringing garlic throughout the house.
*That’s for vampires, you idiot*

Today, it finally happened . . . Teddy won the President's race during the Washington Nationals game today. He has never won before. Click for the video.

In case you've never seen them before, here's a photo of the presidents: 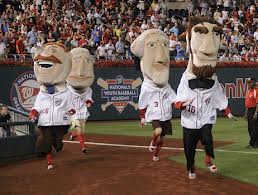 Posted by Pastor Peasant at 3:04 PM No comments: