The Problem of Inversion

God is love.
Love is God.

The first is truth.
The second is sin and seems to me what has become the driving force behind much of what is happening in our culture today. Love has become the god of many. In the name of "love" almost anything is permissible and everything becomes permissible.

Posted by Pastor Peasant at 2:42 PM No comments:

Just something to think about . . .

There are some who are calling the state to get out of the marriage business and leave it to the religious institutions to define and regulate.

Posted by Pastor Peasant at 7:18 AM No comments:

It's NOT Your House 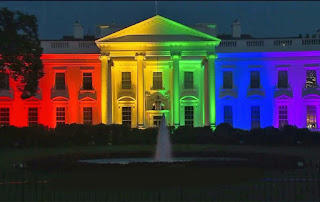 This is embarrassing. President Obama shows himself not to be a president for all people (as he so famously said when he campaigned) but only for those who agree with him.

A sad and embarrassing day.

Posted by Pastor Peasant at 7:05 AM No comments:

So here's my question: now that the state has taken the word "marriage" and made it something it never was before, what is our response? We can cry and pout, but that never does any good. We can insist our our own definition of marriage, as opposed to the state definition, but I think that too will not do any good. Perhaps we need to separate the church's definition of marriage from the state's - to make a consistent verbal distinction between civil secular marriage and biblical marriage, so that it is always front and center that something is amiss.

Will faithful pastors be able to stay in the marriage business? Probably not. It will be different in different states. In New York (where I was previously), anyone "ordained" could perform a wedding and sign a marriage license. And they didn't really check - they just took your word for it. In Virginia, you have to prove that you are ordained, submit your credentials, a letter from your ecclesiastical supervisor, and then take an oath at the court that you will not do anything against the state's law. Currently, the state has not said that clergy have to marry anyone, but I can see the day coming. And once it does, I will be out.

What I would like also to see is a yearly march like the March for Life. There was one this year, a March for Marriage (or something similarly worded), but I didn't know about it until after the fact. I will look for it next year, and I hope they publicize it more and more and make it as big an event. I do not think we should capitulate to this redefinition, but make it an issue.

Another sad day for the truth.

Posted by Pastor Peasant at 11:42 AM No comments: 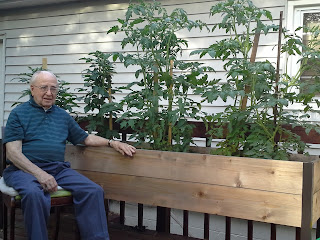 Happy Father's Day, Dad!
Grandpa Peasant with his tomato garden.
The man who taught me what it is to be a man of God, to love family, nature, and not take things for granted. He took care of me for many years; now we get to care for him.
Thanks Dad.
And thanks Father for giving me such a father.

St. Augustine asked what pagans did when they did not succeed at resisting vices (or even try to). Very simply, they attributed them to God! And so they made a god for lust, Venus, a god for violence, Mars, and so on, feeling themselves justified in practicing these vices. The same thing is happening today with regard to Christ, and it is one of the most disturbing signs of regression into paganism. There is no weakness or obsession in modern culture that is not somehow attributed to Jesus in a way that makes people feel justified in cultivating it.

~ Raniero Cantalamessa
in Remember Jesus Christ: Responding to the Challenges of Faith in Our Time, 14
Posted by Pastor Peasant at 8:44 AM No comments:

Hi all. (Or maybe it's both of you!) Been of the blogging air for a couple of weeks - not traveling, just busy and hunkering down a little bit. I'll try to get caught up on some things . . .

First of all, marked 20 years of marriage with my bride a couple of weeks ago. Had a very nice day out. Went to a museum-estate in DC in the afternoon, followed by a nice seafood dinner near the White House, and then a stroll around as the sun set, including seeing a new memorial, the American Veterans Disabled for Life Memorial. As memorials go, I thought it was a very good one. If you're in DC, make sure you go and see it.

It was a nice day for I don't think we've had that much time by ourselves, just the two of us, for a very long time! We did take a selfie . . . 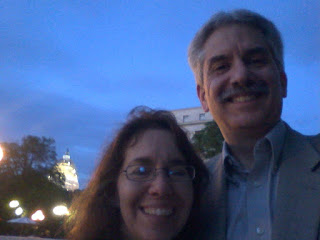 I know, it's not very good - I haven't had much practice with selfies. We wanted to get the Capitol Dome in the background, so I succeeded in that at least!

Posted by Pastor Peasant at 11:07 AM No comments: