I never finished my vacation photos . . . I don't have many left, actually. After leaving southwestern Virginia, we went to Appomattox/Lynchburg and spent a couple of days there. We saw the site where Lee surrendered to Grant and the Civil War Museum there. Another day we went to see the Country Estate of Thomas Jefferson called Poplar Forest and the D-Day Memorial. So this was more of an historical stop than a hiking/outdoors spot, although our hotel here did have an outdoor pool that was OPEN, so we enjoyed that very much. :-)  Anyway, a couple of pictures of the D-Day Memorial . . . 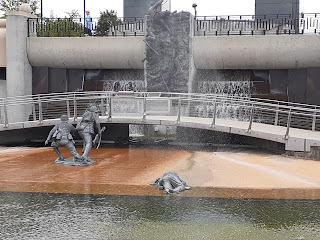 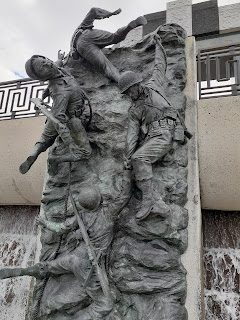 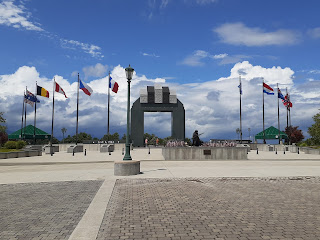 The pictures don't do it justice. This was a very cool memorial that it took some time to walk through. Very well done. It you are down near Lynchburg, I highly recommend it.
After this top, we had a couple of days left and so headed back up to northwestern Virginia to hike some more of the George Washington National Forest and to some of the waterfalls up there. However, storms were moving in - both to where we were at and at home, so we cut short a couple of days and came home. But overall, a very good and relaxing vacation this year.
Posted by Pastor Peasant at 5:59 AM No comments:

Email ThisBlogThis!Share to TwitterShare to FacebookShare to Pinterest
Labels: Vacation

So we've been wanting to replace our deck for a few years now. Here's what it looked like: 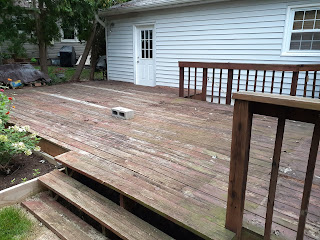 It was in pretty bad shape. So two years ago I had some contractors come and give me an estimate. The one I really liked never returned my calls or emails. :-(  So I dragged my feet . . .  Last year I had three more contractors come over - two I really didn't feel comfortable with, and the third was okay. So I was going to go with him . . . but dragged my feet again. So this year, I contacted 5 more contractors and asked for estimates. Only one got back to me! But I felt very comfortable with this company and they were highly rated, so we went with them. Turns out it was a good decision. They did an incredible job, were courteous, cleaned up at the end of each day, and weren't put out by all my questions. 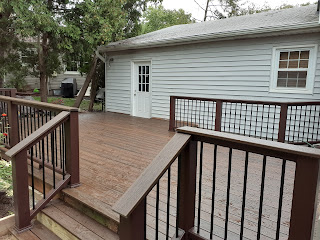 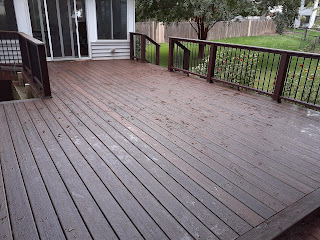 With this Covid summer, scheduling has been a problem for them, so they couldn't say exactly when they would be able to do the work. The county is very slow with their permits, weather delays, etc. They also told me that materials were not always available and that when they were ready, the materials may not be. So what we did was order the material right away and got it delivered to my house. My wife and I carried it ALL into the garage (and there was a lot!) where it sat and waited until they had an opening in their schedule to install it. And that was this week. :-)  They thought it was going to be a day and a half, maybe a two day job. Turned out to be 3 1/2 days! But the results are great. Then today the owner told me that my decision to buy and have the materials delivered and wait was genius - these materials are not available now and we would have had to wait a lot longer.
A couple of the things I wanted to do when they tore out my old deck was (1.) close off the fox den that was under there, so that if the foxes ever get back under there, they can't just move back in! And (2.) get rid of all the trash that had been thrown under there before. Successful on both counts. I also took a picture of some of the interesting items of trash we found under there . . . 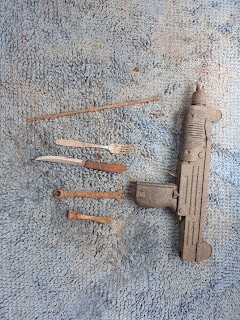 A toy gun, a long drill bit, a fork, a steak knife, a wrench, and a chicken bone! I'm not sure if the chicken bone was left there by humans, foxes, raccoons, or some other critter, but all now gone. :-)  We are very pleased with the results, and I would highly recommend this company if you are looking into getting or replacing a deck.

Posted by Pastor Peasant at 7:10 PM No comments:

Email ThisBlogThis!Share to TwitterShare to FacebookShare to Pinterest
Labels: House

A Couple of Books

For exercise, one of the things I do is ride my bike on a stationary trainer in my basement. If you've ever ridden a bike indoors, you know that the times on the bike drags! It seems like a ride takes forever. But if I read while riding, the time usually flies. So that's what I do. Sometimes theology, but not always. I like to read other things as well, and as I am somewhat of a history buff, and especially American (Revolutionary and Civil War) history, I read a bunch of that.

So, I thought I'd share with you two books I recently finished: 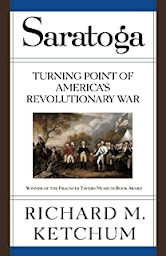 I found this book in a used book store last year sometime. I've been to Saratoga Battlefield and knew the story somewhat. But what separated this book from the rest was that a good portion of it was dedicated to the events leading up to the battle of Saratoga - a lot of information not usually given. That helped put it into context and really shed some light. So if you like this kind of history, I recommend it. It's not a "page turner" like a Jeff Shaara book is (more popularly written), and it's not short, but definitely worth the time to get into the nitty gritty. I also see that he has written on the Victory at Yorktown and Battles at Trenton and Princeton - I might have to look into those.
The book I read while on vacation this year:

I've read other books by McCullough and have usually enjoyed them. This book is not new - written back in 1978, I think - but very highly rated and does not disappoint. Again, what I really like about this book is all the historical things that happened that are not usually presented. Like, how the French were the ones to actually try and build this thing, but failed. How America got involved. All the challenges building this canal presented. So again, I would recommend. :-)
What am I going to read next? Not sure. Maybe some theology. I have some books on tap to read. I just ordered a Jeff Shaara book on the Civil War Battle of Vicksburg - used, but that hasn't arrived yet. We'll have to see what I feel like this afternoon . . .
Posted by Pastor Peasant at 11:18 AM No comments: