As I have written before, that odd and somewhat confusing reading from Luther came up in the Treasury reading again this morning. For those who want to see what I wrote about it in the past, and for a link to another explanation, go here (post 1) and here (post 2).

Posted by Pastor Peasant at 7:36 AM No comments:

Thanks Esgetology for posting these quotes. Go read them - you will not be sorry.

A Measured and Deliberate Attack on Religion's Moral Influence

A New Kind of Paganism

Posted by Pastor Peasant at 2:02 PM No comments:

I liked this quote from Luther in Friday's Treasury reading:


We also are to look at our misfortunes in no other way than that with them God gives us a light by which we may see and understand His goodness and kindness in countless other ways. Then we conclude that such small misfortunes are barely a drop of water on a big fire or a little spark in the ocean. Then we understand and love the words: "O give thanks to the Lord, for He is good; His steadfast love endures forever!"

Posted by Pastor Peasant at 1:59 PM No comments:

The #1 difference between Christianity and Islam is that there is no forgiveness in Islam. As the riots in Afghanistan rage for yet the fifth day over the accidental burning of a Koran, this difference stands out so clearly. In Isalm, there is no Saviour and so no forgiveness - only vengeance and justice and retribution. That's all they know, so that's all they do. Sad. Kyrie eleison.
Posted by Pastor Peasant at 1:56 PM No comments:

More on the Healthcare Mandate

These videos have been posted by many others, but just in case you haven't seen them . . .

President Harrison's testimony to Congress on the Healthcare Mandate

President Harrison explaining our concern over the Mandate


Posted by Pastor Peasant at 7:46 AM No comments:

Listen to the Book of Concord 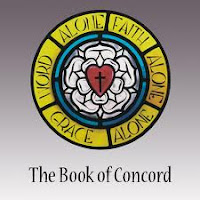 It was passed on to me by a parishioner that the Book of Concord is now available in an audio format for you to listen to. I believe you can even download the files to listen on your iPod or mp3 player. Here's the link to the site. From here you can also access the documents to read, or to read along as they are being read.
Posted by Pastor Peasant at 7:50 AM No comments:

Email ThisBlogThis!Share to TwitterShare to FacebookShare to Pinterest
Labels: Confessions

Morning Prayer on the Web

I have been doing my morning devotions on the webex video conferencing service for over 2 years now. My thought was simply that I would invite others to join me in hearing God's Word and praying, if that were helpful to them. Some mornings I have one or two people join me, but others, like this morning, I had probably almost 20! And it is a joy to be able to pray for the many requests they enter and for people in all kinds of needs. We start at 7 am (I know, I know, too early for some and too late for others, but its the best time we could pick!) and it lasts about 20-25 minutes. You are always welcome to join us. Click here for information how to do so.
Posted by Pastor Peasant at 7:54 AM No comments:

Well, when is an "accommodation" not an accommodation? When is a "compromise" not a compromise? When it comes to Obama's Health Care mandate to religious organizations to cover "Women's Health Care," abortions. I watched his announcement on Friday and thought to myself, "That solves nothing." And it truly doesn't. For example, my church body has its own health insurance. So, when he says that churches will not have to pay, but the insurance companies still will, how does this help us? And church bodies like ours? It doesn't. Even if we had a separate insurance company, we would still have to pay them to give the coverage to others. It's all a shell game. Even though many in the media hailed this compromise from Obama, the lawsuits and battles will continue. Nothing has changed.

I had taken comfort in our plan being "grandfathered," but apparently that is only until 2015 or until *any* change is made to the plan. So the problem is still there. Continue to keep this in your prayers - there is much at stake here for all churches fighting for the sanctity of life.

Also, there *was* a petition on the White House web site to sign protesting this action. It looks like they have closed the petition since they believe Obama has answered it and therefore it is not needed anymore. Go to wwws.
Posted by Pastor Peasant at 7:48 AM No comments:

It has been much in the news recently, that the Obama administration is forcing religious organizations (outside a very narrow exception clause) to supply what they call contraceptive coverage. I say "what they call" because the "Morning After Pill" they call contraceptive, but it is really abortive. (The Morning After Pill prevents a fertilized egg from implanting in the womb. They say this is preventing pregnancy and therefore contraceptive. But if life begins at conception - which we believe - then it is abortive.) The Roman Catholic Church has been mostly in the news opposing this action, and they seem to be the organization that will feel the greatest impact. But I have been wondering: does it impact the LCMS also? Will our Health Plan now have to supply what we believe to be sinful?

President Harrison issued a statement today saying NO. Concordia Health Plan opted to be "grandfathered" in under Obamacare. I am not exactly sure what that all means, but apparently it means they will be exempt from a lot of the new changes and are allowed to operate as they have been all along. This is most certainly good news! But please keep those who are now "under the gun" in your prayers. I am sure there will be lawsuits aplenty coming soon, and this is likely to drag on for awhile. Pray for our country and world to return, as John Paul II put it, to a culture of life rather than a culture of death.

Be sure also that this kind of persecution will continue. The Scriptures promise it. As our culture continues to degrade, the church which becomes more and more countercultural will face more and more pressure to do what the world wants and says is right. Not only with regard to issues like health care, but also with, for example, gay marriage. How long till the government tries to say that churches must marry whoever or lose their right to perform marriages? Or lose their tax exempt status? Or have to pay fines? It's coming.

But whatever happens, whatever threats are made or carried through, the church must remain faithful to the Word. "And take they our life, goods, fame, child, and wife, let these all be gone, they yet have nothing won, the kingdom ours remaineth." (from: A Mighty Fortress by Martin Luther.)
Posted by Pastor Peasant at 5:26 PM No comments: