Mark does not give us a lot of details about Jesus' temptation, like Matthew and Luke. OK - he doesn't give us ANY details! Only tells us that it happened. In fact, he doesn't even tell us how it turned out. Jesus just afterwards shows up in Galilee. So He came out alright.

Hmmm. That got me thinking . . . The shorter ending of Mark's Gospel is the same way, isn't it? There is no risen Jesus, but the young man/angel who is sitting there does say He is risen and then this little tantalizing nugget: go, tell his disciples and Peter that he is going before you to Galilee. There you will see him, just as he told you. 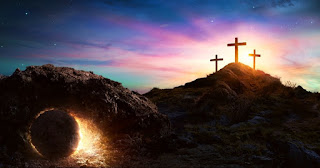 Posted by Pastor Peasant at 8:52 AM