So because Zion National Park is so popular, you cannot drive around in it - you must take the tram they have at the Visitor's Center. OK, that doesn't sound so bad . . .

So after a long Sunday we didn't sleep in on Monday morning, but we didn't rush either. But by the time we got to the Visitor's Center, we had to wait some 30 minutes or so in line for the tram. So yes, the stories are true of its being crowded!

But pretty impressive, too! One of the things that amazed me were how different all these parks have been - Canyonlands, Arches, Mesa Verde, and now Zion - all so very different in their features. For Zion, it was the soaring mountains and cliffs. Some pictures . . . 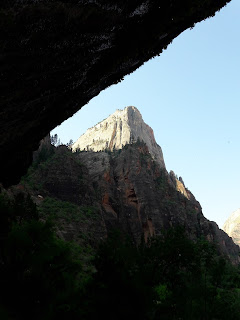 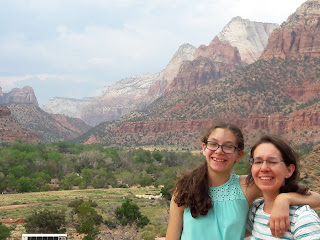 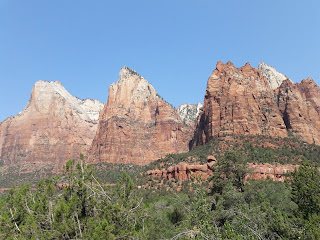 The three white peaks here are "the Three Patriarchs" - Abraham, Isaac, and Jacob. (Jacob is kind of hidden behind the browner peak in front of him.)

We had so many parks to see in a limited amount of time, that we only had a day or so in each one. So with Zion, many of the hikes they have are on the longer and more difficult side, so we weren't able to do as many as we might have liked. Also, they had some rock slides recently, shutting down 3 or 4 of the trails. Here's one of them: 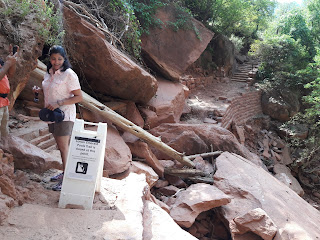 You can see where the trail picks up again on the far side of this picture, after the large rocks that have obliterated the trail! It's going to take them some time to figure out the best way to clear these are re-open things.

We went back again on Tuesday morning to finish up our time at Zion - this time we woke up early and got in line before six, to get the first tram. We did, but we weren't the first ones there! So on Tuesday morning, we hiked up to the section called the "Narrows," and then it was time to head out to our next destination . . . 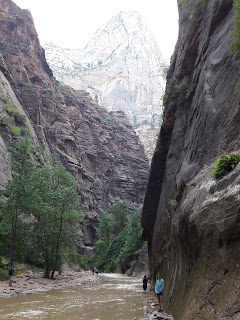 See Daughter Peasant in the foreground? 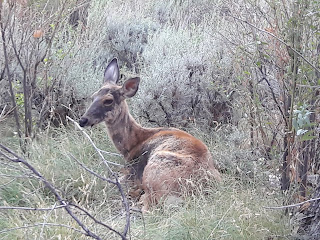 Another friend right outside the Visitor Center.

Posted by Pastor Peasant at 6:00 AM